St. Croix Rods was recognized at the 60th annual conference of the Association of Great Lakes Outdoor Writers (AGLOW) held in Chautauqua, New York when they were given the highest award bestowed by the organization. The award was presented during the Clam Outdoors Golden Glow Banquet held at the Peek’n Peak Resort. St. Croix’s history reads as the straight definition of hard work and determination. In 1948, co-founders Bob and Bill Johnson, both avid fishermen, decided to construct and sell landing nets. Their quality nets proved too costly for most sportsmen.

Perusing a display of cane fishing poles, the brothers decided to modify them to make them portable. They cut the poles into three shorter lengths 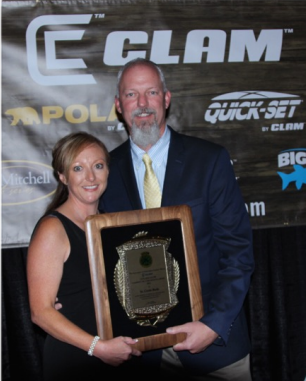 and fitted them with brass ferrules. A local hardware merchant immediately ordered 500 rods, and the St. Croix Rod Company was born. Brother Doug Johnson and cousin John Olson joined the new venture. It is not clear how they decided upon the company name, but since the St. Croix River bordered their stomping grounds of Minnesota and Wisconsin, it is surmised that this was how the namesake was chosen.

Not many people know that over the years, there were a variety of goods manufactured that were essential to the development and success of the company. Solid and tubular rod blanks were sold to other companies such as Zebco and Waterking. Private brand rods were created for Orvis, L.L. Bean, Cabela’s, South Bend, Cortland and many others. Sundry items such as Department of Natural Resources shocking rods and landing nets, pool cues and marine antennas all contributed to the company’s longevity.

Low-priced foreign markets and higher costs at home left St. Croix in serious trouble by the mid 1970s. The only solution seemed to be to move production to Japan. St. Croix would be reduced to a name on a foreign-made rod. Its workers, mostly women who were part of low-income families, would be out of jobs. At this time, St. Croix remained the only major manufacturer of rods left in the United States. Gordon Schluter, a past CEO of St. Croix found two partners to purchase St. Croix Rod. He literally poured his life’s saving into it and risked everything he owned at a time when he could have taken a comfortable retirement.

Gordon Schluter, as President and General Manager of St. Croix Rod decided the plant would go into limited production immediately, and would concentrate on fishing rods and pool cues. St. Croix would no longer handle the associated terminal tackle business, but rather would point all their efforts toward manufacturing the quality fishing rods for which the company had become famous. Paul Schluter, a son of Gordon and current president of St. Croix Rod, was hired as St. Croix’s first employee sales representative. Their rebirth can be credited to dogged hard work and determination. They began improving the quality of the products and sourcing new components. A large private-label contract with Zebco boosted their efforts.

In 1990, Gordon Officially retired at the age of sixty-nine. His four children bought the company from their father. The St. Croix story now belongs to the new generation of Schluters. Together they share a commitment to the accomplishment of St. Croix’s mission to deliver high-quality products for fishing enthusiasts. They believe employees and stakeholders should grow professionally, personally and financially as a result of their association with St. Croix. Additionally, it is their goal to keep customers excited about being associated with St. Croix and that it’s leadership continue to be respected and admired throughout the tackle industry.