Groves, TX – (August 17) – Sure-Shot Game Calls is sad to share the news that co-founder, inventor and world champion caller James “Cowboy” Fernandez passed away yesterday in Beaumont, Texas at age 86. The entire Sure-Shot Game Calls family, friends and fans mourn his loss and extend our sympathies to his family. 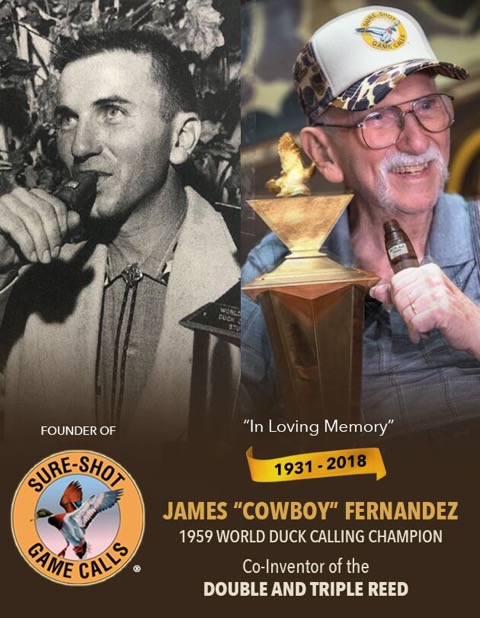 Cowboy worked with George Yentzen to design and patent the first double reed duck call in 1950 and the triple reed in 1968. Cowboy was the first Texan and first double reed contestant to win the Worlds Duck Calling Championship in Stuttgart, Arkansas in 1959 using the double reed Yentzen Caller. And others followed, winning World Championships with this Yentzen Caller as well. He was well known for his calling prowess and won numerous regional and international competitions. Fernandez was inducted into the Legends of the Outdoors Hall of Fame in 2014.

“There was only room in this world for one Cowboy Fernandez,” explained Charlie Holder, current owner of Sure-Shot Game Calls. “He will be sorely missed. We greatly appreciate all of the support, messages, and well wishes from the friends and fans of Sure-Shot.”

About Sure-Shot Game Calls:
The 60+year old company was founded by James “Cowboy” Fernandez and George Yentzen in Nederland, Texas in the early 1940s. After many prototypes, their first product, the 1950 Yentzen Caller, became the very first patented double-reed duck call introduced to the marketplace. In 1959, Cowboy Fernandez entered several duck calling competitions and both he and the Yentzen Caller became world class champions. Charlie Holder purchased the company in 2011. Today, Sure-Shot offers over two dozen game calls for waterfowl, predator, deer and turkey.