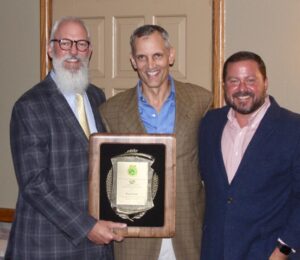 Paul A. Smith of Wauwatosa, Wisconsin was presented the Association of Great Lakes Outdoor Writers (AGLOW) Golden Glow Excellence in Craft Award during the 63rd annual conference held in La Crosse. A Golden Glow Award is AGLOW’s highest honor, but the Excellence in Craft is truly the most treasured as it recognizes the recipient for outstanding dedication, effort, and high quality of outdoor communications work. The Council of Past Presidents of AGLOW recognizes that Paul exemplifies all of these qualities.

Mark C. Smith, Executive Director of AGLOW had this to say about Paul, “Paul is a 25 year member of our organization and a really great guy. He has served on our board of directors and has sat on several committees over the years, however, his recognition here is specifically for the quality of outdoor media content that he creates.”

Paul is the Outdoor Editor for the Milwaukee Journal Sentinel, but he has also been a contributor to the Wisconsin State Journal, Houston Chronicle, Midwest Flyfishing, USA Today, and Wisconsin Trails Magazine. He regularly does work as a freelance writer and photographer as well as book editing and reviews.

AGLOW Executive Director Mark C. Smith went on to say, “Paul’s body of work serves as an exemplary model of what outdoor writing should look like. It is the kind of work that inspires writers and media content producers. He is an award winning writer and an accomplished outdoorsman with a story to tell. A true renaissance man among his peers in outdoor communications”

Founded in 1956, AGLOW is one of the nations oldest and most respected professional outdoor communicators organizations in the country. The association boasts over 400 members, comprised of writers, editors, publishers, broadcasters, authors, lecturers, photographers, artists, electronic media specialists, bloggers, vloggers, podcasters, outdoor industry representatives, tourism professionals and conservation groups. The association stretches far beyond the Great Lakes region with membership from over 20 states and Canada.