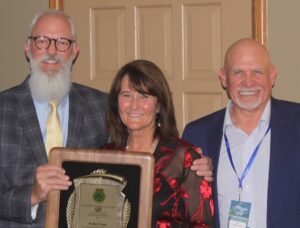 Honored in the Individual Category was Shelley Crant. Sales Manager for the The Beaches of Fort Myers & Sanibel, Crant was born in Florida, raised in Arizona and spent summers in Wisconsin. She has always been a warm-weather girl and has always loved the outdoors.

Crant has stated she considers it a privilege to be able to work with outdoor communicators because of their shared passion, which is opening people’s eyes to what sparkles and what creates an “ah ha” moment.  Some of the comments she has heard through the years have been: “I never realized…there are so many shells on the beaches. These sunsets are epic. Look at how pink the roseate spoonbills are. Wow, you have some intense summer storms. There is tremendous brillance in your storied nights.”

Shelley says she cherishes sharing the destination where she lives because it offers a unique opportunity to experience an incredible array of nature on the water, on the trails, in the skies and on the shores.

Shelley said building successful relationships with media has been key in making the adventures and the stories happen. Many of those relationships have grown into true friendships that she treasures. And like all good friendships, she believes it is a two-way street. There have been many times the media has reached out and she would make their visit happen. And there have been other times – times things have been a little tough for the region, like after a hurricane – when – unsolicited – she has had numerous media FRIENDS reach out to ask “What can I do? How can I help spread the word for you?” Now that is truly caring. And that is what it takes to build a relationship that means something and that is why Shelley Crant was awarded the Golden Glow Award for Outstanding Individual.