The Best of Spaulding Outdoors 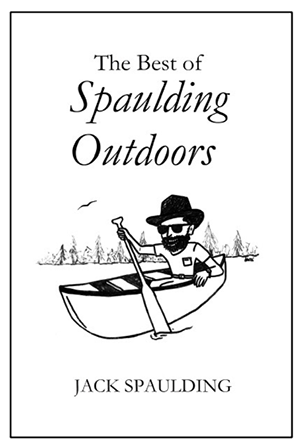 Now available on Amazon in paperback and e-book

The Best of Spaulding Outdoors
by Jack Spaulding

A collection of the best of Jack’s stories from 30+ years of his syndicated column “Spaulding Outdoors – The Inside on Indiana’s Outside” (bonus content included: “Life on the Southside of the County” collection)

Follow Jack into the field and experience firsthand his trials and tribulations as he hunts for wild game and faces down (and sometimes gets bested by) any number of woodland and domestic creatures such as drunken doves, skunks, snakes, cows, bats and bears, to name just a few. Join Jack on the water where he shares tips and tricks for angling success as well as some humbling (and often comical) lessons learned from his fishing, canoeing and boating adventures. Throughout the book Jack also shares his tried-and-true recipes for fish and game, guaranteed to be a hit at your next family gathering or camp cookout. And the culinary adventurous will find harvesting and cooking tips for a wide variety of Indiana’s wild edibles, including ones you can find right in your backyard.

BONUS CONTENT: Jack wraps the book up with a series of stories from his childhood growing up on the banks of the Flatrock River in southeastern Indiana. The “Life on the South Side of the County” collection is a whimsical blend of Tom Sawyer, Huckleberry Fin, and the movie Stand By Me. Get to know young Jack (also known as “Mooch” by his friends in his early years) and his wild and rambunctious pals – Huckster, Lemecee, Feltie, and Stom; and get a glimpse of some of the local sages such as Uncle Nard and old “Toad”, often found whittling and waxing philosophically on the “Liar’s Bench” at the general store. Find yourself transported back to a simpler time as you tag along with the gang on their imaginative and ambitious boyhood quests and exploits in the small river town of Moscow, Indiana, in the late 1950’s.

About the Author
Jack Spaulding is the author of the syndicated outdoor column, Spaulding Outdoors – The Inside on Indiana’s Outside which has been featured in over 30 newspapers and publications locally, regionally and nationally. Jack has dedicated the past 35 years and counting to sharing his outdoor experiences and important information about outdoor sports and recreation and has received many awards and accolades for his works.

For more information or to schedule an interview, contact jackspaulding@hughes.net or 765-570-6701.