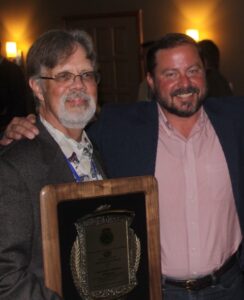 The Conservation Federation of Missouri (CFM) was awarded the Golden Glow Organization Award at the 63rd annual Association of Great Lakes Outdoor Writers (AGLOW) conference in Lacrosse, Wisconsin on September 18, 2019. Founded in 1956, AGLOW is one of the nations oldest and most respected professional outdoor media organizaitons.

CFM Board member Dan Zekor attended the annual conference to receive the award. “It was my privilege to receive this prestigious award on behalf of CFM”, said Dan Zekor. “The Association of Great Lakes Outdoors Writers is a phenomenal organization of communicators dedicated to conservation and the outdoors. To be recognized by them in this way is a tremendous honor, and it underscores the importance of partnerships to achieve the greater good.”

Brandon Butler, former Executive Director of CFM and Past President of AGLOW, was on hand to make the award presentation to Dan Zekor. “The incredible history of the Conservation Federation of Missouri sets the bar for how state-based citizen activism for forest, fish and wildlife should be conducted in this country. From the founding of the Conservation Commission in 1936, to the creation of the Conservation Sales Tax in 1976, to all the incredible initiatives the Federation is active with today, CFM is truly the shinning beacon on the hill when it comes to conservation in Missouri.” Butler said.

In 1935, sportsmen from throughout Missouri came together to form the Conservation Federation of Missouri. They organized with the purpose of taking conservation out of politics. Their initiative petition campaign resulted in the creation of the Missouri Department of Conservation, a non-political conservation agency that has been a model for other states.

Since then, the Federation has undertaken many successful battles to ensure Missouri continues to be the leading state in conservation policies and funding. In 1976, CFM spearheaded successful passage of the conservation sales tax to create stable broad based funding for Missouri’s forests, fauna and fish.

Today CFM is the largest and most representative conservation group in Missouri. It is a citizen’s organization with over 100 affiliate organizations and thousands of members. CFM’s mission is to ensure conservation of Missouri’s wildlife and natural resources, and preservation of our state’s rich outdoor heritage through advocacy, education and partnerships. To learn more about CFM, visit confedmo.org.